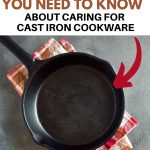 Cast iron cookware has been popular for generations and with good reason! It's affordable, durable, and can be used at a higher heat than cookware with nonstick coating, but knowing how to care for cast iron is essential to preserving your best cookware. The upkeep is easy and only takes a few minutes after each use.

For as long as I can remember, my Nana cooked skillets of buttery cornbread in her cast iron. Because she took excellent care of her cast iron, I now have a few pieces that I cherish!

The biggest reason many people stay away from cast iron is the belief that caring for cast iron cookware can be difficult or troublesome. Truthfully, well-seasoned cast iron is easy to maintain and keep for years.

Cast iron cookware well worth the investment and extra care. Whether you’re cooking a steak or a pan of cornbread, the results are always delicious!

Lodge is my favorite off-the-shelf brand. All products are pre-seasoned and well-made. In my opinion, they are one of the best modern-day cast-iron manufacturers out there.

Natural seasoning of cast iron occurs via polymerization, which is basically the process of “baking” oil into the cast iron. This process protects the cookware. A well-seasoned cast-iron piece prevents sticking during cooking and keeps it rust-free.

With regular use and time, your cast iron will naturally season itself from the oils you use while cooking, making the surface naturally nonstick.

Tip: Lightly oil your cast iron after each use. Allow it to cool after cooking, lightly rinse until the water runs clear, then apply a thin layer of olive, canola, or vegetable oil with a paper towel.

The most common causes of wear and tear on cast iron cookware are the result of poor care. With proper care, you can minimize damage and keep it looking great for years to come.

Most skillets you buy in a store are already pre-seasoned. Most manufacturers only lightly season the cast iron, which means that you might want to further season it before use to avoid food sticking during cooking.

Be sure to read the directions and familiarize yourself with the manual that came with your cookware before using it.

If you purchase a cast-iron piece from an antique shop or receive a hand-me-down, you will want to clean the skillet well before using.

The main difference is that enameled is cast iron that has been coated. It's still just as durable as the traditional cast iron, except it is more convenient as food and debris is easily cleaned away with soap and water.

How to Clean Cast Iron

Cast iron has significantly different cleaning protocols than any other type of bakeware or cookware. It can be very finicky to deal with, but is truly resilient if you make a mistake!

I see a lot of noses turned up when I say not to use soap when cleaning cast iron. Soap can cause rusting and ultimately ruin your cast iron. I’ve read a mild detergent is ok to use, but I prefer to avoid soap altogether.

There are a few different ways to clean cast iron:

After a typical use, simply wipe down your cast iron with a cloth or paper towel, or rinse it in the sink and leave it to air dry. It’s not necessary to clean your cookware after every use, especially if there’s no food debris left behind.

For example, after baking cornbread, caramelizing onions, or frying bacon or sausage, I’ve not found it necessary to wash and reseason the skillet. Simply, wipe the inside of the piece clean with a paper towel or dish towel and store.

However, if there is a significant amount of food or crust stuck-on, it’s best to give the cookware piece a thorough cleaning to avoid rust and unsavory smells.

For example, let’s say you prepared a steak in your skillet, and there’s leftover bits still stuck to the pan. A simple rinse and dry will not suffice. Follow the directions below to remove stuck on food from your cast iron.

Here’s how to remove stuck on food from your cast iron:

Pro Tip: NEVER put your cast iron in the dishwasher or soak for extended periods of time.

How to re-season a cast iron skillet

Reseasoning your cast iron skillet will ensure that it heats evenly and remains non-stick. You will need to reseason it periodically as a part of regular care, even if you store and clean it properly.

How to reseason your cast iron:

In most cases, cast iron can easily be restored even if it is rusty. Start by using steel wool to scrub away the visible rust. Then, reseason the skillet with oil and baking, following the instructions above.

Store cast iron cookware in a cool, dry, and dark place away from fireplaces, heating elements, or direct sunlight to minimize damage and rust.

Can you use olive oil to season a cast iron skillet?

Yes! After your skillet is properly cleaned, I always like to add a tablespoon of olive oil to my 12-inch skillet and smear with a clean paper towel. Don't leave too much excess oil - just enough to thinly coat the pan.

But if that delicious steak or chicken left behind some burned-on crispies, you will want to add a little more elbow grease.

How do you maintain a cast iron skillet?

How do you clean and season a cast iron skillet?

After regular use, a cast iron skillet can simply be wiped out or gently rinsed and left to air dry. Oiling your cast iron after you clean it helps preserve the seasoning.

Can you ruin a cast iron pan?

Yes. Washing with soap, soaking for long periods of time and general neglect will ruin your cast iron cookware. Although it is very difficult to ruin cast iron permanently, the most common damage is stuck-on food or rust, which can be scraped away with a chain scrubber and reseasoned.

Is rust on cast iron dangerous?

Rust is not food-safe, so you should avoid consuming it or cooking in a rusty pan. However, just because your cast iron is rusty doesn’t mean that it should be thrown away! Remove the rust by scrubbing it with steel wool, rinsing, and then reseasoning.

Should I oil my cast iron after every use?

Oiling your cast iron after every use can be helpful to preserve its seasoning. After you cook, wipe out the pan and then brush it with a light coat of oil.

Why is cast iron sticky after seasoning?

Cast iron can sometimes feel sticky after seasoning because of an excess of oil. You may want to gently wipe it down and bake it for a little bit longer if it feels excessively sticky.

Do you wash cast iron after seasoning?

There is no need to wash cast iron after seasoning. In fact, you want there to be a thin oil coating the cast iron, so washing it can reverse the work you just did!

How do you clean a burnt cast iron skillet?

1. Wipe out your pan as best you can.
2. Sprinkle Kosher or sea salt into the pan.
3. With a clean, damp paper towel, gently scrub the stuck on bits from the pan. Add water if needed to help.

Take the time and invest in caring for your cast iron cookware. You’ll be so glad you did.

Went to use my frying pan and got this aweful smell from the pan, why it was cooked in before, cleaner well and dried well before putting on the oil. What is the cause. Thank you!

This is great for daily care! But if you run across a piece that's been abused the fastest way to fix it is to have a nice bon fire and once the wood is nothing but coal add the pan and fill with coal. In the morning once it's cooled bring in and scrub clean and coat with crisco and bake at 450 for 1.5 hours. The one I did looks better than a brand new pan! I did have to recoat and bake it twice but it was really bad! Hope this helps for anyone thinking their pan is trash like I did.

Gonna try this thanks 😊

I love my cast iron pans! These are great tips on caring for them and keeping them for a lifetime!

You're in the right place! If want to learn more about cooking meals that are just as delicious as they are practical, stick around and browse a while. Start by clicking on the recipes button at the top or use the search bar for a specific dish.