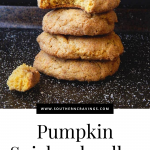 Soft and chewy Pumpkin Snickerdoodles have all the fall flavors packed into one delicious cookie recipe. Made with real pumpkin and dusted with cinnamon sugar, these are easy to whip up and bake in 10 minutes!

These would go GREAT with a frozen peppermint mocha or hot chocolate!

The great thing about these chewy, pumpkin spice flavored cookies is that they are so simple and easy to make!

Combine the ingredients, round them out and bake for 10 minutes! A great solution to last minute cookie swaps and parties that have a way of sneaking on to our calendars.

Unfortunately, these are often overlooked. But I love the comforting fall flavors and the soft, chewy sweetness from this recipe!

Why do they call them snickerdoodles?

According to the Joy of Baking, this recipe came about around the 1800s and are either of German or Dutch descent. The are crinkly on top with a cinnamon sugar coating.

Why did my snickerdoodles not flatten?

Often, this happens because the sugar and butter are over-creamed.

As you mix, make sure you are scraping the sides of the bowl so the ingredients are well-incorporated, but not overly mixed. Just mix until combined and they will turn out perfectly!

Can I skip cream of tartar in snickerdoodles?

If you need a substitute for cream of tartar and baking soda, use two teaspoons of baking powder instead.

Yes, kind of. The reason these snickerdoodles are different in color is because of the pumpkin and cinnamon.

How to make Pumpkin Snickerdoodles

The main key here is to make sure your butter is softened or the cookies will not turn out. I’m sure there’s an excellent reason out there, but for the sake of all cookies, just do it!

Tip: If you are really running behind, soften butter by warming a glass bowl with hot water, then placing the empty (but hot) bowl over a stick of butter for a few minutes.

First, to make the cinnamon sugar coating combine the sugar and cinnamon in a small bowl and set aside.

Then, add in the flour, cream of tartar, baking soda, and salt. Mix with a spoon until all is combined and dough is formed.

Next, take a small handful of dough and roll into small balls, about 1-1/2 inches in diameter. Then, roll in sugar mixture.

After baking, allow the cookies to rest for a few minutes on the same cookie sheet. Then, transfer to a wire rack to cool.

These Pumpkin Snickerdoodles have all the fall flavors packed into one delicious cookie recipe. Made with real pumpkin and dusted with cinnamon sugar, these are easy to whip up and bake in 10 minutes!
5
Print Recipe Pin Recipe
Servings 24 cookies
Prep Time 10 mins
Cook Time 10 mins
Total Time 20 mins

For the Cinnamon Sugar