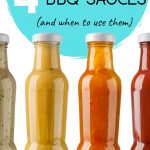 The type of BBQ sauce a person stands behind is most often dependent on the region they grew up in.

Some people grew up enjoying sweet and tangy BBQ sauce at every cookout, while others grew up coating their food in rich and spicy BBQ sauce. What do all these people have in common? They each think that their BBQ sauce is the best.

So, what are the different types of BBQ sauce? What sets them each apart from the last? Which BBQ sauce reigns supreme? Well, that last question may be up for interpretation, but I can break down the rest for you.

By the time you’ve finished reading this guide, you’ll know everything there is to know about BBQ sauce.

What is BBQ Sauce?

BBQ sauce, also referred to as barbecue sauce, is a sauce that is used as a marinade, condiment, or spread for meat and other foods cooked in the barbecue cooking style.

It’s not meant to moisten food, as any liquid in BBQ sauce evaporates during the cooking process. It does, however, add a ton of rich and savory flavor to any dish.

For many years after first being introduced to early colonists by Native Americans, the barbecue way of cooking remained an exclusive tradition of southern and East Coast states.

Over time, the different regions adapted their own unique BBQ sauce styles based on the local flavors.

Eventually, the barbecue cooking style spread all over the country, but the types of BBQ sauce we know today are still categorized by the region they originated in.

When to Use BBQ Sauce

Most often, you will see BBQ sauce served on the side of barbecued meat as a condiment. However, in some cases, the sauce is cooked with the meat. This can yield delicious results, as long as it’s done the right way.

When it comes to BBQ sauce, 9 times out of 10 it contains some form of sugar. Because sugar burns at 265°F, grilling it allows for a good chance that the sugar will burn, causing the sauce (and, in turn, the meat) to taste bad.

If you want to add BBQ sauce to your meat during the cooking process, your best bet is to add it when the meat is roughly 10 minutes away from being fully cooked.

This gives the sauce enough time to caramelize and add flavor without burning. If you’re cooking meat that requires lower temperatures, like oven-roasted ribs, then you can layer the sauce on earlier than you normally would—about an hour before completion.

Styles of BBQ sauce vary depending on which region of the country you’re in. Some are thick and spicy, while others are thinner and tangy.

If you ask 10 people from 10 different regions what true BBQ sauce is, you’ll likely get 10 different answers. That being said, all types of BBQ sauce can be broken down into 4 main categories.

This is the most common type of BBQ sauce.

The most popular tomato-based BBQ sauce, and probably the one you’re most familiar with, is Kansas City BBQ sauce.

This type of BBQ sauce is a North Carolina staple. It’s thinner than tomato-based BBQ sauces and tends to be spicier as well.

It typically doesn’t include any tomatoes and makes a fantastic pairing with pulled pork, as the lighter flavors balance out the heavy, fatty meat.

In the Western Carolina region, small amounts of ketchup are used in the sauce, but not enough to change its thin texture.

When you think of BBQ sauce, mayonnaise as an ingredient might seem a bit strange.

If you find yourself in Alabama, don’t let anyone hear you say that! Alabama is famous for its white BBQ sauce, made with mayonnaise as the base.

Mayonnaise-based BBQ sauce, or white BBQ sauce, is thinned out with lemon juice and vinegar, then flavored with various spices and typically served with chicken.

South Carolina is the only region that uses a mustard-based BBQ sauce.

It’s most common in the area between Charleston and Columbia, which many believe to be due in part to the large population of Germans in the area.

Generally paired with pork dishes, this type of BBQ sauce is thin and spicy. It’s commonly made with yellow mustard, vinegar, sugar, and spices.

What is the main ingredient in BBQ sauce?

This depends on the type of BBQ sauce you’re working with. Based on the four types of BBQ sauces, the main ingredient could either be tomatoes, vinegar, mustard, or mayonnaise.

What does BBQ stand for?

BBQ is a common abbreviation for the word ‘barbecue’ and is used among native English speakers in countries like the United States and England.

What are the four types of BBQ sauce?

When should I use BBQ sauce?

Whenever you want! BBQ sauce is one of the most versatile condiments on the planet. It can be used to dress up barbecued meats, sandwiches, burgers, hot dogs, nachos, and even pizzas. It also doesn’t have to be enjoyed on its own; you can mix BBQ sauce into dips, and dressings for a flavorful southern twist.

What is the best BBQ sauce?

This is totally up for debate. While my personal favorite is ____, all types of BBQ sauce are delicious in different ways. One might taste objectively better with ribs, while another is better with chicken. It all depends on your flavor preference, so don’t be shy—try them all!