The best recipe for brisket in the oven! Learn how to make a juicy, tender beef brisket without a smoker or grill. This slow cooked brisket is cooked overnight and yields a perfectly shredded cut of meat for sandwiches or BBQ.

For this brisket and many other meats, I use my homemade dry rub recipe. It’s easy to whip up and slather it on chicken, beef, pork, fish, and more.

Beef brisket is a tough cut of meat, which is why it’s best to cook on a low temperature for a long period of time, which gives the connective tissue time to break down and gelatinize into a tender result.

Brisket is a cut of meat from the lower chest portion of the animal, under the first five ribs. It’s a large cut that is sold boneless, usually weighing about 8-20 pounds.

In my experience, this cut of meat has a fair amount of fat which needs to be trimmed during the prep process.

For those who don’t want such a large cut of meat, you can purchase a point cut or a flat cut. Both of these cuts come from a whole brisket.

How much brisket should I buy per person?

Since this method uses a whole brisket, I estimate 1 pound of brisket per person when I am purchasing the meat. This means fat and all!

During the process, you’ll trim back some of the fat, then the rest will gelatinize during cooking. Essentially, the end result will come out to be a little less than 1 pound per person. It’s better to have leftovers than not enough!

How to Cook Brisket in the Oven

Step 1: Trim and Prepare the Meat

Be prepared to start this process about 2 days ahead of time.

Working with a defrosted whole brisket, trim the fat cap down until you have about ¼ inch of fat remaining. The fat cap is the thick layer of fat on the meat.

You can leave the fat intact; however, it may prolong the cooking time.

Then, place the meat in a large pan. I use an oversized lasagna pan from Costco. You can use a disposable aluminum pan for easy clean up or a roasting pan (without the rack).

About 24 hours before cooking, apply the dry rub to all sides of the meat. You can use your preferred rub or my homemade dry rub.

With the brisket fat-side up, cover and refrigerate for 24 hours to marinate and absorb flavors.

Remove the pan from the fridge and place in a preheated oven at 275°F for about 1 hour per pound. Leave the pan covered with foil.

The brisket will be perfectly tender and ready to shred when the internal temperature reaches 200°F degrees with an in-oven meat thermometer. It’s ok for the brisket to cook beyond 200 degrees internally, within reason.

Since the meat cooks in its own juices, the meat will be incredibly tender and should fall right apart when shredded.

When the brisket has reached 200°F degrees internally, remove from the oven and allow the meat to rest undisturbed at room temperature for about an hour. Keep the brisket covered during this time.

How long should I rest brisket? Learn more about the science behind resting a brisket, best internal temperature, and more brisket tips.

Using BBQ shredding claws or two large forks, shred the meat right in the cooking container and serve on a bun or by itself.

FAQ and Tips for Overnight Brisket in the Oven

How do you keep a brisket moist in the oven?

Always cook brisket fat side up.

As the fat melts during cooking, it will baste the meat and keep it tender and juicy.

Allow the meat to rest.

Shredding brisket immediately after cooking will be harder to do and will result in a less juicy product. Resting allows the juices to redistribute throughout the meat, making it even more tender.

You can read more about resting brisket here.

Many stores will label brisket as “pre-trimmed”. Buying a pre-trimmed brisket isn’t necessary. In fact, I usually trim more off before applying the seasoning.

My best advice is to take a look at the fat cap that is on the meat before purchasing. If it’s too thin, the meat will likely dry out.

Choose a cut with a fat cap of about 1/4 inch or so. Also, keep in mind that the fat is factored into the price, so don’t choose a brisket that is overly fatty.

Should I cover my brisket in the oven?

To avoid drying out the brisket, cover the pan with foil before putting in the oven. This will lock in moisture and prevent what’s called the “stall” – when the moisture evaporates and “stalls” the cooking time.

What is the best temperature to slow cook a brisket?

Cooking in the oven: A general rule of thumb is to plan 1 hour per pound. For example, a 20 pound brisket will take between 15-20 hours. The entire process from trimming, marinating, slow cooking, and resting will take about 24 hours.

Make sure you give yourself plenty of time for the entire process.

Can you leave a brisket in the oven overnight?

Yes! As long as you have followed the instructions of this recipe, and accounted for the size of the cut and the time needed, an overnight cook in the oven is perfectly safe. Double-check the oven temperature and your meat thermometer for extra assurance.

What is the best cooking method for brisket?

No matter if you are smoking a brisket or cooking it in the oven, low and slow is the best method. Brisket is a tough cut (and expensive) that can be quite unpleasant if not prepared properly. Allowing plenty of time for marinating, cooking, and resting will ensure a delicious juicy, moist, tender brisket.

Resist the urge to rush the cooking process. Build in a few hours so you can be flexible.

What to serve with Brisket 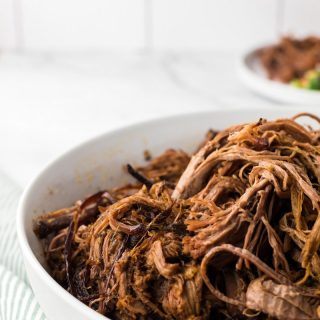 How to Cook Brisket in the Oven

Please read the entire post for details, tips, and more! Visit this recipe for the dry rub

Serving: 1grams
Tried this recipe?Let us know how it was!
Click here to cancel reply.

Made this for Christmas and it was perfect!

Does this slice nicely? We don't want shredded.

@Nancy, I tried it with this recipe and sliced our brisket, it was perfect!!

This is a great explanation of the process into cooking the brisket thanks for that. I want to slice my brisket, should I still continue with the cooking time? Thanks in advance

I also want to slice the brisket. Does that change the cooking method and time it is cooked?

[…] like with a brisket or pork shoulder, estimating for extra is better than not having enough. I estimate for one pound […]