Twice-baked potatoes are a family favorite! Savory baked potato shells are split and stuffed with fluffy loaded mashed potatoes, then baked again for double the deliciousness and a perfectly crispy crust. So many flavors and textures like bacon bits, melty cheese, and chives make this easy recipe a grill master’s best friend!

The number one thing when you are planning a cookout: the side dishes. You need something inexpensive, easy, but also not just something picked up from the store. It needs to be homemade and drool-worthy. Enter: Double Stuffed Potatoes.

It’s great for cookouts, large groups of people, or a weeknight side and practically a meal in itself! My favorite thing about this recipe is that it’s a no-stress side dish that can easily be made ahead of time, then served hot when the pork chops come off the grill.

How to make twice baked potatoes

This recipe easy to make, but it does take a little preparation. The biggest difference between this recipe and most twice-baked potatoes is that these potatoes aren’t split completely in half, but the potatoes are kept whole. Just like a regular baked potato.

Most twice baked potatoes do a simple microwave to get the inside cooked, but this recipe starts with my epic baked potato recipe, where the outside of the potato is coated in olive oil and salt and baked in the oven for about an hour for the ultimate crispy skin. If you love crispy textures, don’t skip this step!

With the same amount of potatoes as guests, wash the potatoes and coat in kosher salt and olive oil. Place on a foil-lined baking sheet in a 400-degree oven for about 45 minutes or until the potatoes are easily pierced with a sharp knife or fork.

Step 2: Split and Mix the potatoes

When your potatoes are done baking, split them open to scoop out the insides.

Start with the tip of the knife about ½ inch from the end of the potato. Then, shimmy it down to the other end, leaving about a ½ inch again.

Tip: Use a set of tongs to hold the hot potato open by placing the tongs at either end of the split potato.

If you completely split the potato in half, no worries. All of the mixins will work as the “glue” to put it back together.

Scoop out the inside of the potato with a large spoon by sliding the spoon down into the potato – about ¼ inch away from the skin.

Place the potato insides into a medium-sized mixing bowl. Then, add the mix-in ingredients and stir to combine.

When the mashed potato mixture is complete, scoop a large spoonful of the mixture and place inside the potato cavity. Continue filling until the cavity is full.

Then, continue with the other potatoes. There might be some mixture leftover, so feel free to load these taters up!

Top with more cheese, and bake until the cheese has melted. Garnish with chives and serve!

Load up the potatoes even more with these additions:

Since everything inside the potato is already cooked, you do not have to worry about bacteria growth with raw products, so these can easily be made ahead of time and stored in the refrigerator until you are ready to eat.

To make this recipe ahead of time, bake the potatoes, restuff them, and then place them in an airtight container in the fridge for up to 3 days. When you are ready to serve, place them on a baking sheet or casserole dish and bake for 20 minutes using the instructions in the recipe card below.

Cooked (finished) stuffed potatoes can be stored as leftovers in the refrigerator for up to 3 days. Reheat the potatoes on a baking sheet for 20 minutes or until warmed through. 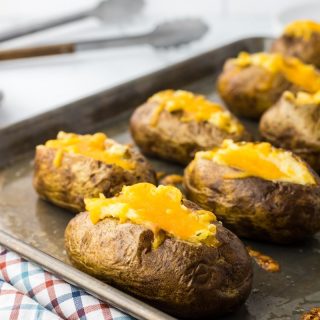 How to Make Easy Twice-Baked Potatoes

Variations and add-ins: Make-Ahead Tips: To make this recipe ahead of time, bake the potatoes, restuff them, and then place them in an airtight container in the fridge for up to 3 days. When you are ready to serve, place them on a baking sheet or casserole dish and bake for 20 minutes using the instructions in this recipe. Storage Tips: Cooked (finished) stuffed potatoes can be stored as leftovers in the refrigerator for up to 3 days. Reheat the potatoes on a baking sheet for 20 minutes or until warmed through.

How long do you heat up a twice-baked potato?

Reheat a twice-baked potato in an oven-safe dish at 350 degrees Fahrenheit for about 20 minutes or until warmed through.

What goes with twice-baked potatoes?

A twice-baked potato is a grill master’s friend and for good reason, too. Serve this alongside a steak, pork chop, pulled pork, brisket, or other protein for a simple but filling meal. These potatoes pair well with other side dishes, too.

Why are they called twice-baked potatoes?

Simply put: they are baked twice! The potato itself is baked until easily pierced with a fork. Then, the insides are scooped out, mixed with all of the fixings, put back into the potato cavity, and baked again until warmed through.

Why are my twice-baked potatoes gummy?

Overmixing can make potatoes gummy instead of creamy. Just mix until the ingredients are well-incorporated.