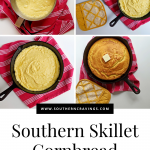 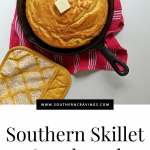 Skillet Cornbread is the quintessential southern side dish! Made in a cast iron pan, this recipe is a savory addition to your next pot of soup or chili.

There are few things more southern than a crispy-edged skillet of cornbread. Growing up in the South, cornbread was always made in a cast-iron skillet, generally one passed down through generations.

Now, I own my grandmother’s skillet – and if I’m honest, it’s older than me by about 20 years! Call me a sentimental mush, but I feel so connected to her when I use it.

There are several cautionary tales when it comes to caring for cast-iron cookware, but I’ll get into that later. I use this recipe frequently, especially in my Cornbread Dressing during the holidays. It’s also a delicious companion with red beans and rice, or as cornbread muffins for easy, hands-free serving!

Each time I buy cornmeal, I stick to Martha White. It’s my tried and true brand loyalty because I know it will come out just right every time. I practically go into auto-pilot making this recipe. It’s easy, fast and absolutely delicious.

Most Southerners protect their heritage – including cherished cornbread recipes – as if someone will jerk it out from under them.

There seems to be a large debate on how exactly the perfect cornbread recipe is made.

Here are a few different variations on cornbread recipes:

Steps for the recipe

The steps are detailed in the recipe card below. It’s as simple as mixing and baking!

What is the best pan to cook cornbread?

A 10-inch cast iron skillet is always the best! It gets the edges nice and crispy, while the inside is perfectly done.

Can I bake cornbread in a glass dish?

Yes, but the edges will not crisp up as they would in a cast iron skillet.

Can I use milk instead of buttermilk?

If you don’t have buttermilk, regular milk (same measurement) will do just fine for this recipe. I’ve heard of people adding in baking soda or powder, but I’ve never found that to be necessary.

How do you season a cast iron cornbread pan?

I’ve got a whole blog post on caring for your cast iron skillets here:

Is corn pone the same as cornbread?

No, it’s much thicker and malleable than this recipe. It turns out more like a cornmeal cake instead of a slice of cornbread.

Is cornbread and corn muffin mix the same?

Yes, instead of adding all of the batter to the skillet, fill each greased muffin tin about 3/4 of the way full of batter. Then, bake until golden brown. 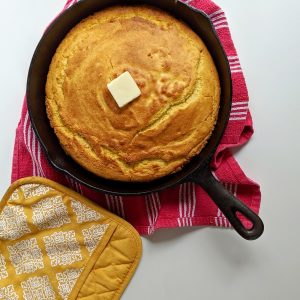 This easy southern cornbread recipe can be used to sop up chillies, soups or as an ingredient in other recipes.
4.92 from 34 votes
Print Recipe Pin Recipe
Servings 8
Prep Time 10 mins
Cook Time 22 mins
Total Time 32 mins

*Add a dab of butter to the top after baking for extra calories and tasty goodness. 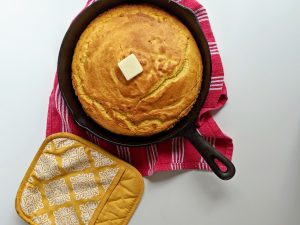 *Batter should be creamy and pourable. If too thick, add 1 to 2 tablespoons additional buttermilk.
Tried this recipe?Let us know how it was!
Click here to cancel reply.

I have been trying to find a recipe like my grandmother's for years & this is it. Thank you! This is crispy, crunchy on the outside, soft & perfect on the inside, I'm so happy. It has been a mission to find this recipe for myself & many family members, so thank you again!

[…] is cornbread dressing? Much like a traditional stuffing recipe, cornbread is a combination of bread, vegetables, […]

I love this recipe. I used it for Christmas and Thanksgiving for my dressing. I do have a question though, how can I convert this recipe into honey butter cornbread? Any suggestions?

I making this Cornbread tonight! Sounds delicious! Do you have a recipe for cornbread without the egg? I made one and just left out the egg but didn't turn out right! I saw a simple recipe on a bag but can not remember if it was yours or Tenda Bake or whose! Any replys and suggestions welcome! Thanks

Hi Patricia! I don't have a recipe without egg. If you have dietary restrictions, I would search for that and cornbread recipes on Pinterest or Google. There are plenty of sites that now offer different recipes for different diets! :) I hope this helps. Feel free to email me if you have any further questions!

Has anyone added grilled corn cut off the cob?